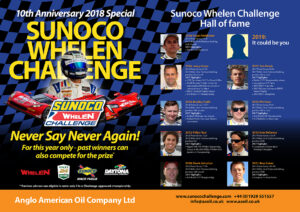 The Sunoco Whelen Challenge will be open to past winners for the first time ever, in a one-off season to celebrate the 10th anniversary of the prize.

The challenge winner has previously won the chance to race in the Daytona 24 Hours, with last year’s winner Stuart Middleton taking second overall in an Action Express Cadillac.

“As it’s the 10th anniversary we thought we’d try and spice it up to get some of the past winners in and see if they can win it again,” said Anders Hildebrand, managing director of Anglo American Oils. “Jonny Adam, Phil Keen, Bradley Smith, they can all do it”.