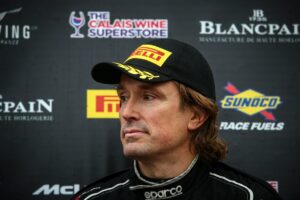 The 2018 Sunoco Whelen and 240 Challenges kicked off over the Easter Bank Holiday Weekend at Oulton Park where no less than four eligible series – British GT3 and GT4, BRDC British F3 and Mini Challenge JCW – were all in action.

Drivers from British GT’s senior category currently lead both competitions thanks to the individual exploits of Phil Keen (Whelen), Flick Haigh and Adam Balon (240). However, with a full season of racing ahead of them, there’s still plenty of time for other rivals to emerge.

Two incredible, fully funded prizes are at stake: a Whelen-sponsored Rolex 24 At Daytona race seat, and entry for the event’s 240-minute Continental Tire SportsCar Challenge round at the wheel of a Sunoco-supported GT4 car.

A meeting shortened by persistent rain and standing water meant British GT3 and GT4 drivers scored the majority of their points in Monday’s opening race.

British F3 has joined the list of eligible Sunoco Whelen Challenge series this year, but just two of its three races per weekend count towards the prize. A win, second place and fastest lap have therefore propelled Nicolai Kjaergaard up to fourth in the standings, the Dane’s initial 102.5-point haul being nine more than Darren Turner recorded for finishing second in British GT3 and 15 better than F3 title rival and Race 1 winner Linus Lundqvist achieved.

Flick Haigh made British GT history at Oulton Park by becoming the first woman to claim an outright pole position and victory. However, that performance still wasn’t enough to give her an early solo lead in the Sunoco 240 Challenge standings thanks to Adam Balon, whose GT4 win and fastest amateur race lap earned him the same number of points.

The pair therefore top the standings together on 132 points, 12 more than Ant Whorton-Eales recorded for his Mini Challenge victory and fastest lap. With the weather putting paid to the championship’s second encounter, Race 1 pole-sitter and runner-up Jordan Collard finds himself fourth in the standings, albeit 27 points shy of top spot.

Two more British GT3 drivers are next up, Jon Minshaw’s fastest amateur lap and fourth place finish earning him the same number of points as Andrew Howard accrued for finishing second overall. GT4 Am Runner-up Graham Johnson joins the pair on 93.5 points, 11 more than Lee Mowle and David Pattison in joint-eighth, while Mark Murfitt rounds out the top-10 following his GT4 debut.

The Sunoco Challenges provide an accurate assessment and comparison of performances across multiple championships during any given season. Points are awarded for qualifying and race results, including fastest lap, which are then converted into an individual average score for each competing driver over the course of a full campaign.

That means each race weekend offers drivers an equal chance to climb and drop down their respective Sunoco Challenge table. It also ensures that performances are taken into consideration across an entire season while placing less emphasis on one-off or unfair results.

This year’s Sunoco Whelen Challenge champion will win a fully funded race seat at the 2019 Rolex 24 At Daytona, courtesy of Whelen.

To celebrate the Sunoco Whelen Challenge’s 10th anniversary AAOC is allowing all previous winners to enter once again. Ordinarily Bradley Smith (2014), Phil Keen (2015) and Jonny Adam (2016) would have been ineligible to fight for a second trip to Daytona.

British GT Championship – GT3 Am and GT4 Am

Radical European Masters – SR3 Am and SR8 Am